Less More
9 months 1 week ago - 9 months 1 week ago #4817 by dretek
Replied by dretek on topic New Airhead Owner - Needs Help! (Lots of Images)
Wobbly I hear ya and thank ya - your response was abundantly clear! I am going to start with valve clearances and timing. I was getting antsy and took the seller's description as truth, because there was mention of timing and clearances already done. But heck, why not do it again?

It also looks like my right exhaust nut is leaking. Is this worth getting the special tool and gasket and then replacing, or hold off until I get a running bike?

I only ask because in Clymer's and pre-carb tuning research, it recommends "intake and exhaust systems must be free of all leaks".

Thank you guys so much. I get my license this weekend. The plan is to ride ASAP!

Also, isn't there a Catch-22, where your bike must idle to get timing right? But in order to carb sync, timing needs to be perfect. My guess is: I adjust my idle screws until I can idle the bike with CHOKE UP. In essence, have the bike idle by ANY means (without flooding the engine), and then set the timing correctly with a strobe light.

I have seen a portion on static timing which requires a special tool..
Last edit: 9 months 1 week ago by dretek.

...because there was mention of timing and clearances already done. But heck, why not do it again?

When does it ever hurt to double check someone else's work ?


It also looks like my right exhaust nut is leaking.

You are correct. It's leaking raw fuel from leaving the "chokes" ON too long.


Is this worth getting the special tool and gasket ?

Only if you ride the bike and it still leaks exhaust gas. But first you actually need to RIDE the bike.

Even then you need to weigh the price of the tool versus dropping by the local shop and tipping the mechanic $5 to tighten the nut for you. The "gasket" is only replaced if it's lost. It's a simple steel wedge that's used over and over.


Also, isn't there a Catch-22, where your bike must idle to get timing right?

Either you have not read the thread suggested in my very first post, or you have not retained the information from that thread. The answer to most of your questions is right here in these 2 threads.

Less More
9 months 6 days ago - 9 months 5 days ago #4839 by dretek
Replied by dretek on topic New Airhead Owner - Needs Help! (Lots of Images)
UPDATE:
Today I tested my luck and see if I can get the bike to idle. I turned the air and idle screw to default 1.5 turns and tried to fire it up 5-7 times. Nothing, so I left it alone. I did accidentally leave the spark plug cap off ONE time I hit the 'Start' button. I read this can be bad for the ignition.

Moved on to adjusting the Left Valve Clearances. Intake was good @ 0.004. Exhaust was tight and I loosened it to 0.008. My question is: why does the spark plug need to be removed? Does it need to be removed on both sides? I found the OT mark on the flywheel, however, after adjusting, I realized it wasn't DEAD center looking at it straight on. I also wasn't 100% sure I was feeling the right "grip" when moving those feeler gauges.

I moved onto the right side, and no matter how much I spun the rear wheel and aligned the OT, it never seemed like the rocker arms on the Right side were loose enough to have clearance. Either that, or they were way too tight. What am I looking for in terms of the relationship between the flywheel OT symbol, rear wheel spinning, and how the rocker arms are moving in and out?

I thought this would be much easier.

I attached photos of the spark plug, clearances, OT visibility. 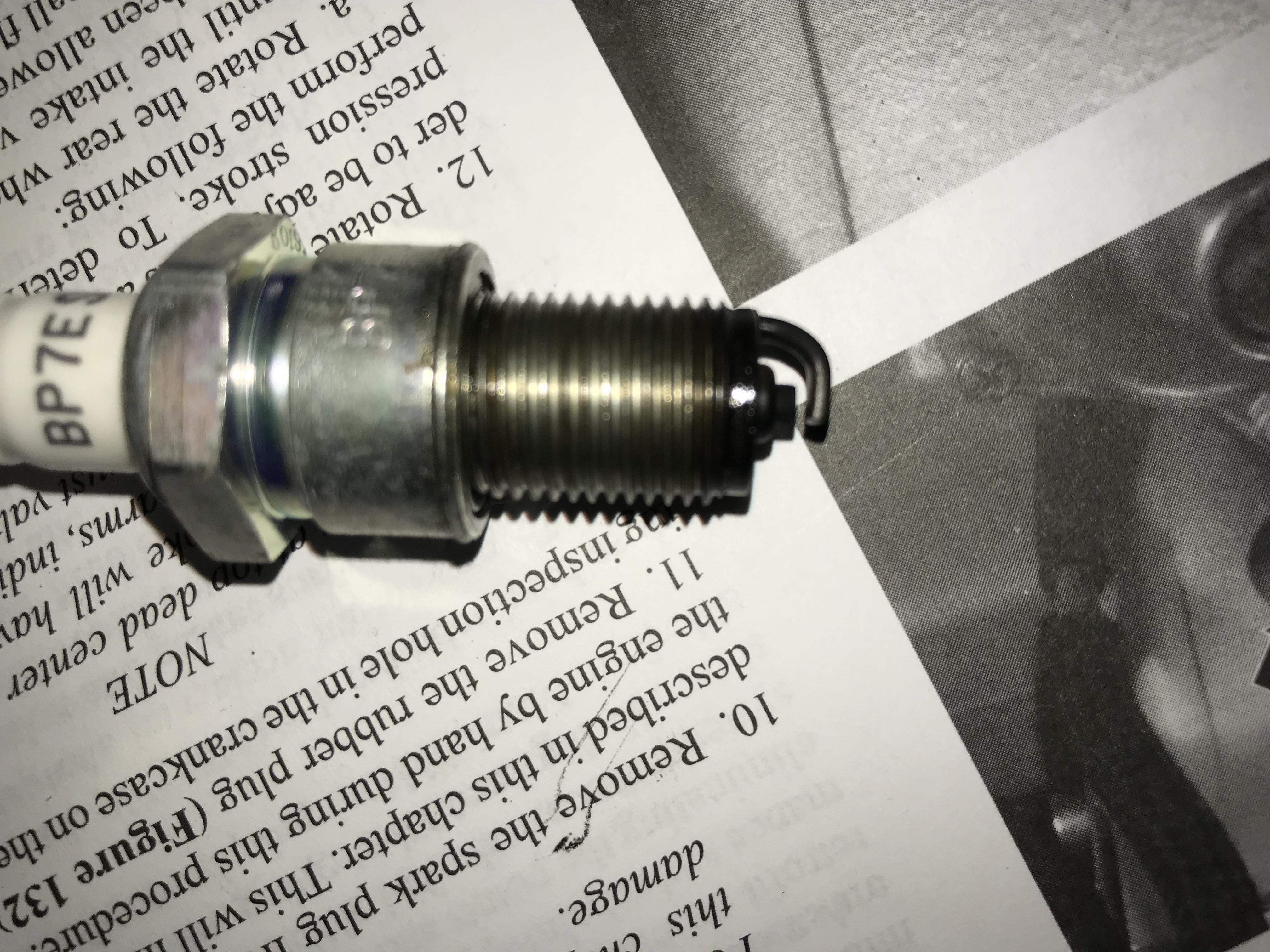 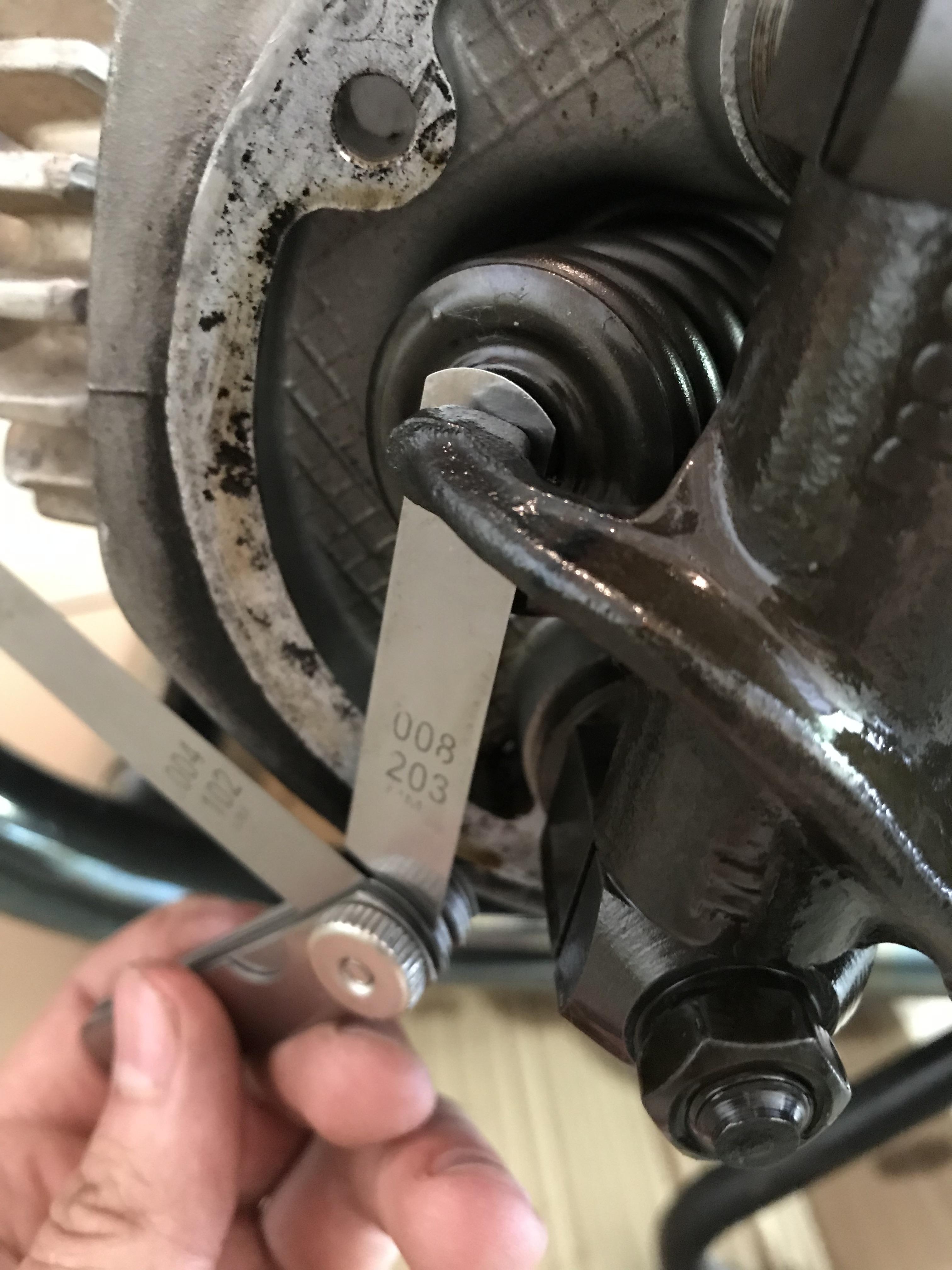 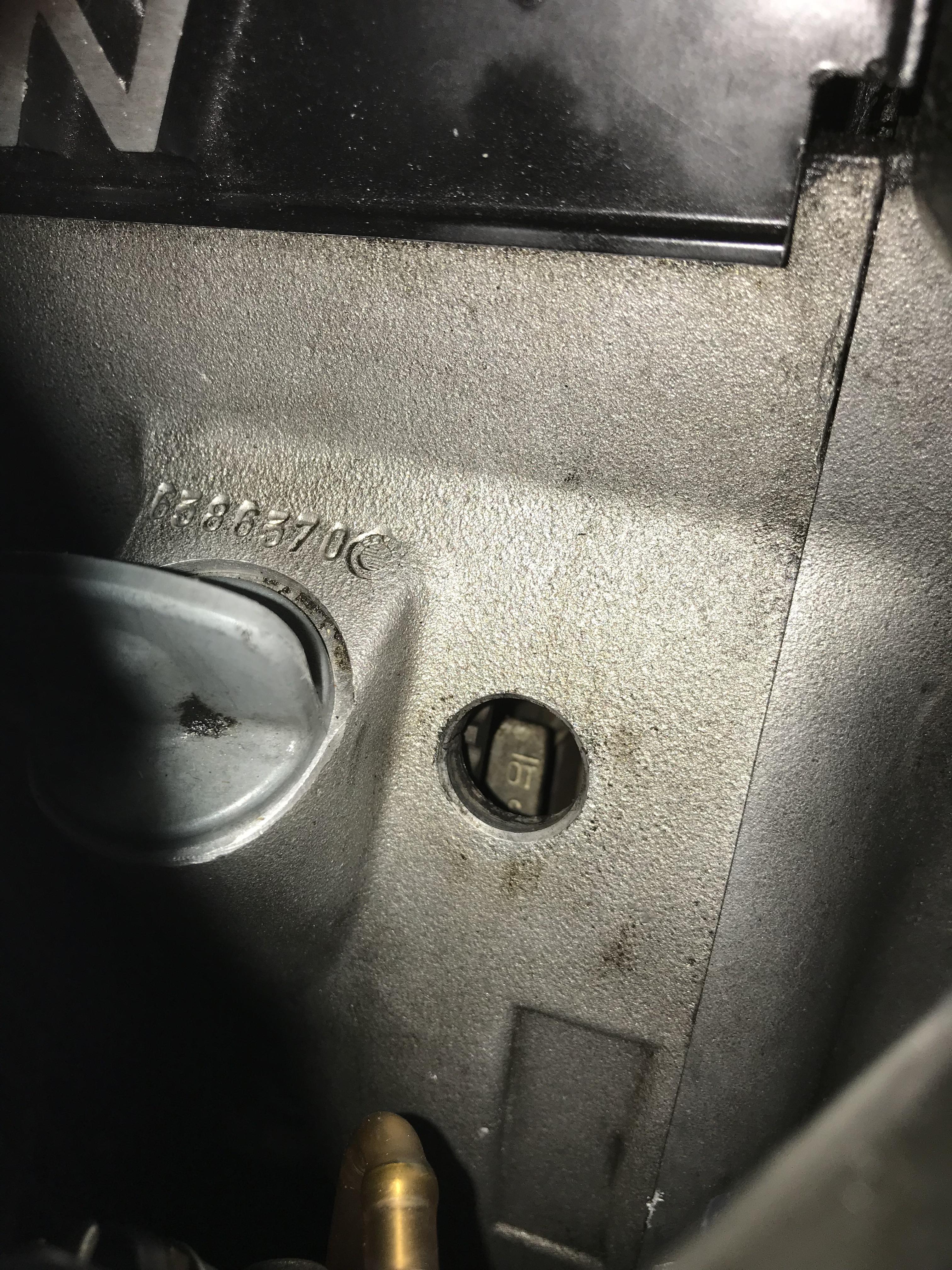 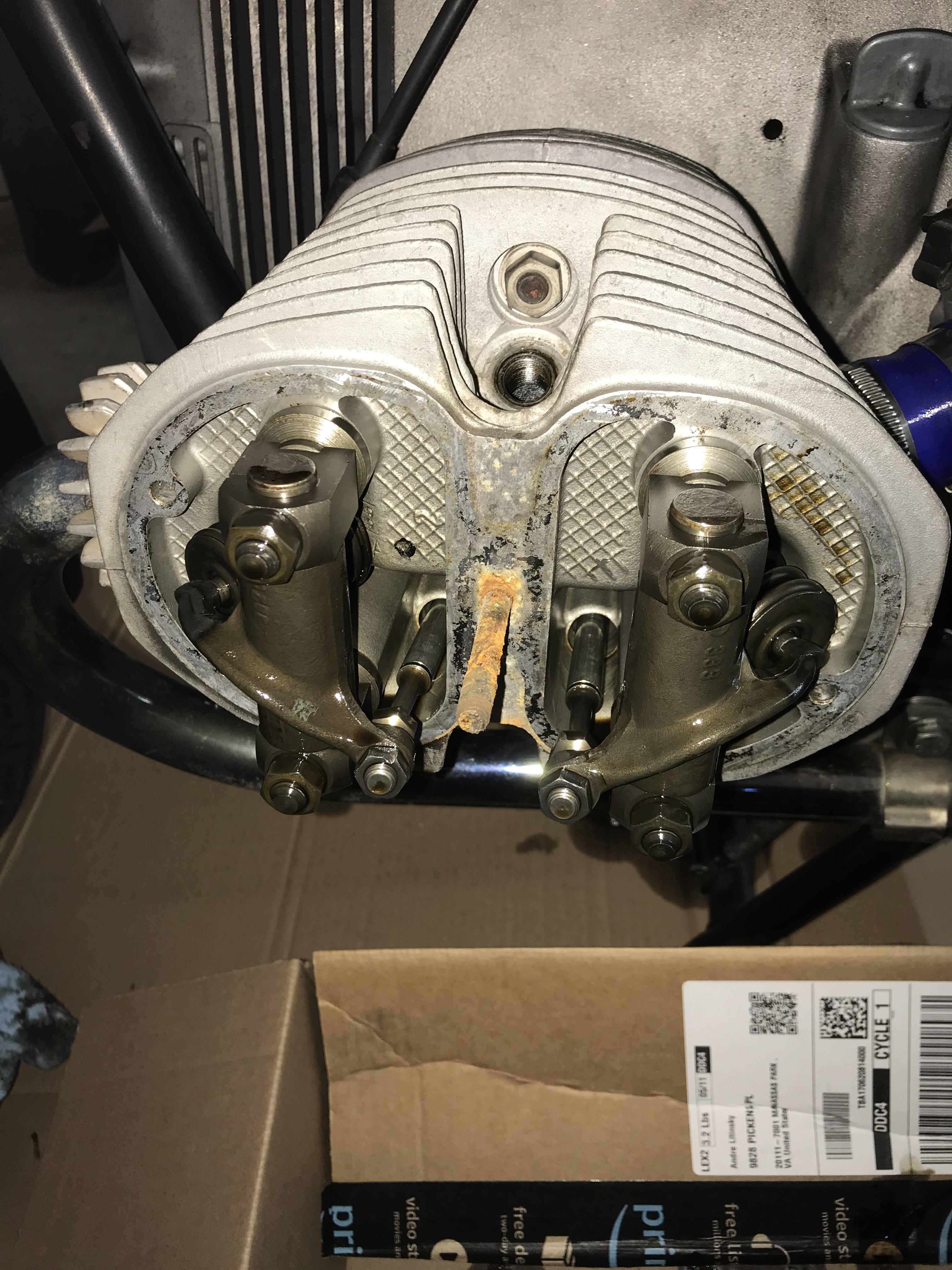 Less More
9 months 4 days ago #4845 by dretek
Replied by dretek on topic New Airhead Owner - Needs Help! (Lots of Images)
It turns out I was hitting TDC for the Right side, there was no clearance! I'm glad I found out. That being said, I did stick a plastic pen in the combustion chamber and a tip of the plastic pen fell in there. I am going to attempt to get it out with a hemostat and another special tool.

Next step ignition timing. Hopefully, I can get the bike to idle! At what point do I need to use a fan for having my bike idle?

Lesson learned: do not stick plastic things in the machine!

Less More
9 months 4 days ago #4848 by Wobbly
Replied by Wobbly on topic New Airhead Owner - Needs Help! (Lots of Images)
The valves are not adjusted on both cyl at the same time, because they are operating 360 deg different from each other. You adjust one cyl, spin the engine 360 deg and then adjust the other.

Rotating the engine is best done by placing the bike in top gear and bumping the rear wheel by hand.
Don't hide 'em, Ride 'em !!
#15150

Wobbly wrote: The valves are not adjusted on both cyl at the same time, because they are operating 360 deg different from each other. You adjust one cyl, spin the engine 360 deg and then adjust the other.

On a 4-stroke engine, each complete firing cycle takes 2 revolutions, or 720 crankshaft degrees. Because the engine fires on one side, then the other, there is one combustion every 360 degrees (or 720/2). Because of the alternating firing order, the action of the valves is also 360 degrees out of phase with each other. In fact, it is only by watching the valves that we can really tell what phase the pistons are on. So on a 4-stroke we always watch the valves... not the pistons.

A peculiarity of the 4-stroke engine is that while one cylinder is on TDC for the "combustion stroke", both valves are closed. These are the 2 valves that get their clearances adjusted. At the same instant, the opposite cylinder is at TDC on the "exhaust stroke" and both its vales are partially open. That is to say, there is NO VALVE CLEARANCE, and so the valves CANNOT be adjusted at this crankshaft position.

Therefore at the flywheel "OT" position, one set of valves is in the correct cam position to be adjusted, and the other set is absolutely NOT correct. However, the OT mark does not tell you which set of valves to adjust. It is not enough information. The OT mark is then inviting confusion when clarity is required.

Wobbly wrote: Removing both plugs makes this spinning easier. Rotating the engine is best done by placing the bike in top gear and bumping the rear wheel by hand.

1. The best way to adjust the valves is to place the bike on the centerstand, remove both plugs, and place the bike in top gear. Then it's a simple matter to bump the rear wheel (forward or backward) and very accurately control the position of the crankshaft.

2. Using this method, we can so accurately control the crank position that we can completely stop watching the flywheel marks and simply watch the motion of the valves.... and KNOW with absolute certainty when the OT mark will be in the flywheel window.


To Summarize
1. The "OT" mark ("on top") to Germans means the exact same thing as "TDC" (top dead center) does to English speaking mechanics.

3. Simply rotate the engine to a point where you see BOTH rocker arms moving. If you'll find the position half-way through both rocker arm movements (by bumping the rear wheel backwards and forwards), then you can look in the flywheel window and see the OT mark nearby. You may not be exactly on OT, but you'll be close enough to adjust the valves ON THE OPPOSITE CYLINDER. Again, you'll want to adjust the valve clearances on the cylinder where the rocker arms that are NOT moving in the vicinity of the "OT" mark.

4. Once the 2 correct valve clearances are adjusted, then the engine is spun 360 degrees. The roles of the rocker arm movements will then be reversed, the rocker arms you just adjusted will now be without clearance, and the valves on the opposite cylinder can be safely adjusted.

It is only when both sets of valves are correctly adjusted that you will have compression on both cylinders.