Less More
6 days 8 hours ago - 6 days 7 hours ago #6592 by Humble Bub
'91 R100RT: Quit Running was created by Humble Bub
I would appreciate any pointers as to what direction to go before I start throwing money at the parts counter or trailer to an airhead guru.

1991 R100RT with 28,000 miles. The only modification is Omega updated charging system. Bike was running perfectly.

The bike started idling poorly. It would start, idle for a few minutes and then start skipping. Application of throttle and often would stall. Valves checked and in spec. New plugs added. Tank and carb bowls drained and fresh gas added.

The bike now will not start. I have discovered there is no spark on right cylinder and what appears to be weak spark on left. My first thought is coil but I have not seen much here about coil failure. Anyone have any thoughts?

Less More
6 days 7 hours ago - 6 days 6 hours ago #6593 by Wobbly
Replied by Wobbly on topic '91 R100RT: Quit Running
Good morning. Yes, there is one very common part failure that makes this happen.

• Disconnect one battery terminal cable.
• Remove the front fairing cover and the front engine cover.
• Fish around within the cover and you'll find an ivory colored 3-pin connector that's attached to the lead of the ignition "bean can". There are only one or two connectors in there, so it should be easy to find. This connector may be sitting above the diode board, but there's enough slack in the harness to pull it down and easily get to it.
• There is typically a small spring wire that acts as a retaining device and keeps the 2 connectors connected. Defeat that device and separate the 2 connectors.
• The white/ ivory/ light yellow connector half (which is on the lead to the "bean can") may be cracked, turning to dust, broken, disintegrating, fractured, or all of the above. That connector MUST be replaced. Any damage or aging to that connector causes the exact issues you're having. 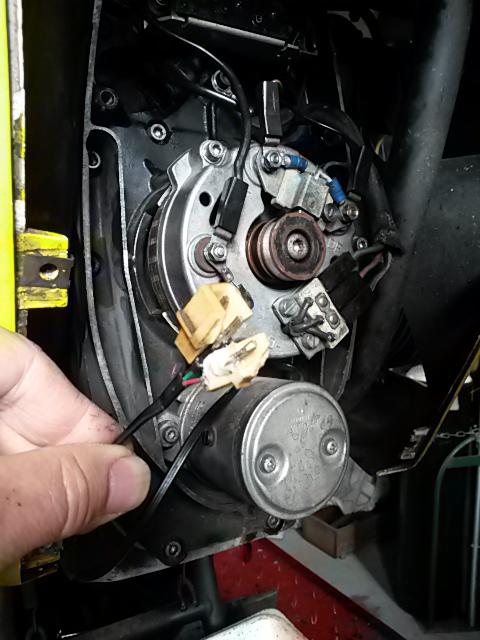 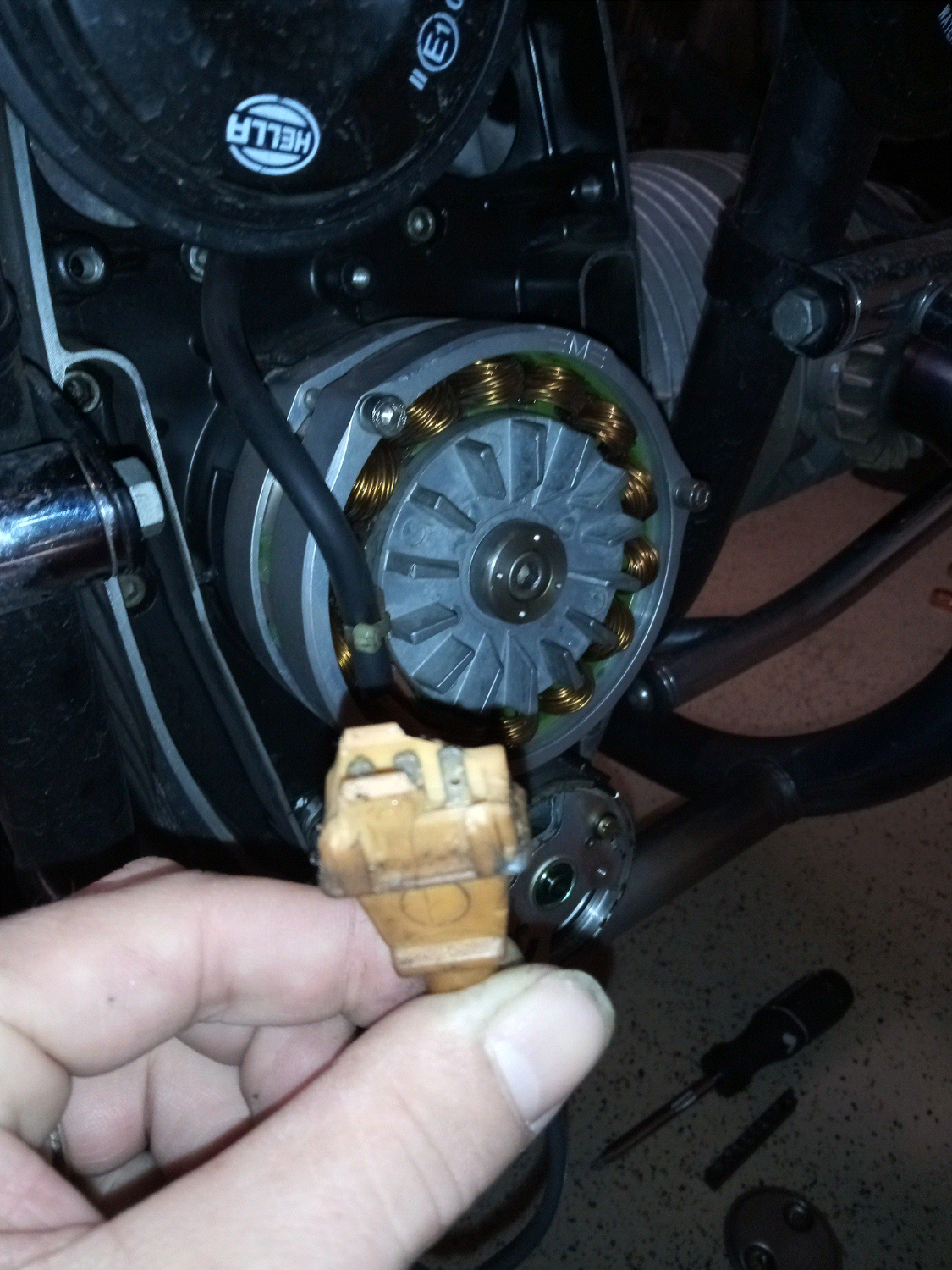 • The only way I know to fix this is to call Rick Jones at Motorrad Eliktrik and buy the replacement lead, complete. This $30 part is NOT displayed on their web site. What you'll get is the connector, pre-assembled onto the 8" wiring cable. Web link: motoelekt.com/
• Remove the 2 screws securing the "bean can" to the front of the engine, and pull the ignition unit straight off.
• Take the bean can to the work bench, where you can open it up, and solder in the new wires on the bench.
• The bean can only goes back onto the engine one way. If you work carefully, you can match up the housing outline in the grit, and your ignition timing will be very, very close to where it was.
• It's always best to strobe time the engine to the Full Advance mark at high RPM, just to be sure.
• Be VERY careful replacing the cover. It is VERY easy to pinch either or both the alternator wires and/or the new ignition wire. And then you bike won't run for a new reason.

► These type ignition parts fail due to age, not mileage. It will also be helpful if you'll replace your plug wires with metal-core wires, and both plug caps with 5000 Ohm caps. Motorrad Eliktrik also sells very nice plug wire/cap replacements.

► If you got that far by yourself (and this is not difficult work) replace that connector no matter what you think or believe, because it will fail sooner rather than later. Best to do it now rather than in some dim motel room at 3AM.

Less More
6 days 6 hours ago #6594 by Humble Bub
Replied by Humble Bub on topic '91 R100RT: Quit Running
Thank you very much. I have a few days of distractions and will be back at this. A week of 90° temps is discouraging me in a hot garage.

This is not, very physical work. 7 fairing screws, 1 battery terminal screw, 2 front engine cover screws, and 2 "bean can" screws. If you have a lift, then you can do the entire task from the comfort of a lawn chair. I kid you not. If we plotted all repairs Energy required vs. Meaningful results, then this would be the lowest effort, most fruitful repair by far !

I highly suggest you order the bean can lead and the plug wires today, so they'll be there when you get ready.
Don't hide 'em, Ride 'em !!
#15150

Less More
6 days 6 hours ago #6596 by Humble Bub
Replied by Humble Bub on topic '91 R100RT: Quit Running
Yeah, no lift and a body that has seen 73 years. <grin>. I will call Rick once time zones catch up. I hope he can do fed x as mail is taking 7 weeks plus from the US to Canada.

It sounds like a must do upgrade even if there is another issue.

Less More
6 days 6 hours ago #6598 by Humble Bub
Replied by Humble Bub on topic '91 R100RT: Quit Running
Reading that I will say again, you are a paragon of patience.