Less More
1 week 2 days ago - 1 week 1 day ago #5724 by 12173
Neutral switch issue was created by 12173
Did a spline lube on a 81 R100RT, 67K miles. Replaced the neutral switch while tranny was out. Original was having intermittent issues. Once everything was back in place there's no green light for neutral position. Measured voltage at wires, brown/blk and only get 5.8-6 volts. I'm figuring that the switch is closed when in neutral to complete the circuit lighting the green light. The original wiring diagram shows brown/black wire going to terminal board in light housing, but don't see any brown/black wires in the bucket.
The diagram also shows the wires go to none side of a diode. Does the diode reduce the voltage? Wouldn't think so.

Old neutral switch shows no continuity between the wire connections when the plunger on the switch is depressed. With the new switch in place, I don't get continuity when either in neutral or in gear. If the switch is installed all the way in with a crush washer, how critical is that?

Any ideas would be greatly appreciated.
thanks,
redhorse
81 R100RT
Last edit: 1 week 1 day ago by Wobbly.

Less More
1 week 2 days ago #5725 by 8166
Replied by 8166 on topic Neutral switch issue
I don't remember which way the switch has continuity, but if you test it on the bench, out of the bike, and you don't see continuity when the plunger is either in or out, you've got a bad switch.

There are two versions of the switch, and each has its own silver washer, too. Make sure you have the correct one for your bike.

The washer under the switch is also a spacer, and if you don't have the correct part the switch won't work properly. The washer should also be replaced every time, as it's also a crush seal.

The silver colored neutral switch that BMW has been selling for a while is junk, and will soon start leaking around the white potting compound where the wires come through.

The aftermarket gold colored switch from Siebenrock is marginally better. It doesn't leak as often, but will have problems with continuity. You names your poison and takes yer chances.

I can't comment on your low voltage issue, other than to say I agree that a diode shouldn't cause it. When's the last time you cleaned the fuses and their terminals? Could be time again.

What voltage are you reading across the battery terminals?
8166 Scot Marburger, This email address is being protected from spambots. You need JavaScript enabled to view it.
Check out the Yankee Hill AirTech Weekend, April 25-26, 2020

13.16 volts on the battery. If I "jump" the BR/SW wire to the BR wire at the switch the green neutral light comes on. I checked the washer/crush on the original switch and it's thicker than the replacement washer, almost twice a thick. I'll have to drain the tranny and pull the switch. I'll have to bench test the new switch, which is the Siebenrock brass version. I'm wondering if I should use the original washer with the new switch?

I'll work on that tomorrow and let you know how it came out...
redhorse
Last edit: 1 week 1 day ago by Wobbly.

That's a good thing becasue the bulb is the FIRST thing to check, even though they can be hard to access. I've had VERY good luck inserting the green LED from SuperbrightLEDs.Com which allows easy viewing even in bright sunlight.


12173 wrote: I checked the washer/crush on the original switch and it's thicker than the replacement washer, almost twice a thick.

That only means that particualr switch has been judged to need a thicker wash. And that's all. Don't draw any erroneous conclusions just based on that one fact.

You should start by bench testing the switch as per Scot. Then you should reinstall the switch and test it in the tranny with an Ohm meter connected directly to the 2 contacts. (Harness disconnected for all tests.) You should see a definite Make/Break correlation on the meter in and out of gear.

Then, if you don't see that Make/Break action of the switch THEN you can try different thickness washers. Remember it's just as likely you'll need BOTH washers as only the thin one. Keep your mind open to creative solutions.

12173 wrote: The diagram also shows the wires go to none side of a diode. Does the diode reduce the voltage? Wouldn't think so.

No, the diode acts as logic in the circuit. You are forgetting that the Neutral Switch not only allows the illumination of the Green dash lamp, but also tells the Starter Motor that it is safe to allow the electric starter to operate.

If readings are allowable at the switch, then it is FAR more likely that your Starter Relay is having trouble, ESPECIALLY if your bike has the under-fuel-tank Brake master cylinder. The under-tank brake m/c is famous for puking brake fluid all over that relay and all its connections. In fact, every electrical connection in that area should be spray washed with HOT soapy water, and then EACH connector re-seated with a dab of NO-OX-ID to restore the good electrical connections. Click Here

A single Brown/White wire enters the headlamp shell, but only attaches at a single point to the multi-color connection board at the Brown/White connection area on the board, which is found at the 3:30 position. 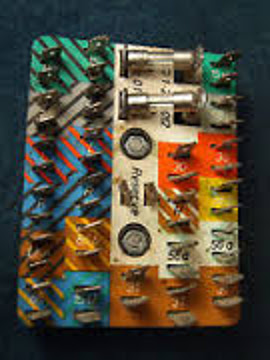 Less More
1 week 1 day ago #5729 by 12173
Replied by 12173 on topic Neutral switch issue
Gentlemen,
Thank you for your responses.
I believe the problem was solved with your knowledgeable input.
- Battery voltage 13.1 v with bike off, on charger. New battery.
-The bulbs were replaced with LED bulbs. These bulb, I found, are polarity sensitive. solved that part of the puzzle.
-The crush/spacer washer that came with the new neutral switch (NS) is only 1.3mm thick. The original washer is approx. 3mm thick. Looked up NS on Boxer2Valve site for this year bike www.boxer2valve.com/Merchant5/merchant.m...Product_Code=6131097 and they have attached a short video explaining the NS continuity test. Basically; button released (neutral) circuit is closed light comes on. button depressed (in gear) circuit open light goes out.
- Bench tested the switch, at rest-continuity, depress button-open circuit.
- Tested NS with wires attached, out of tranny, green light comes on, depress button, light goes out.
- Installed NS back in bike with thicker washer, everything works as it should.
- As for low voltage reading at wire for NS, ??? Green light is a bright as other lights. All the LED lights are brighter than OEM incandescent bulbs, especially the blue high beam indicator.
- Did find the BR/SW (brown/black) wire in the light bucket behind the BR/GE (brown/yellow) wires in the terminal board.
- 81 RTs have MC on handlebar, everything under the tank is dry. Did clean up the fuses, some PM.
Wobbly- thank you for that picture of the terminal board.

Just wanted to say thanks again for all your help.
Airheads rule
redhorse
81 R100RT
-

12173 wrote: ....
- Battery voltage 13.1 v with bike off, on charger. New battery.
-The bulbs were replaced with LED bulbs. These bulb, I found, are polarity sensitive. solved that part of the puzzle.

• Are you measuring the battery voltage with the shop battery charger still connected ?? WTF ?? You are simply reading the voltage of the charger, NOT the battery. Disconnect that thing right NOW !

• What type of "new battery" ?? That would need to be an extremely nice battery with a voltage of 13.1V, or the high voltage could indicate excessive charge voltage which will severely shorten the life of your battery. Start the engine and run the RPM up to 3000 and hold it. Place a DC voltmeter across the battery terminals and see what it says. Should be between 14.1 and 14.3 depending upon battery style..... AGM, Flooded Cell, Gell Cell, etc.

• Did you also replace the dash board Alternator warning lamp with an LED ??? You cannot do that. The resistance of the incandescent bulb is a INTEGRAL part of the charging system. The regulator depends upon the internal resistance of an incandescent.... which the LED cannot provide. This could be having a negative effect on the discussion above. You need to booklet from Mottorad Elektrik explaining the charging system.